Catalysts for a Change. 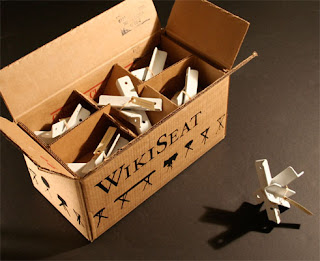 "Meek young men grow up in libraries, believing it their duty to accept the views which Cicero, which Locke, which Bacon, have given, forgetful that Cicero, Locke, and Bacon were only young men in libraries when they wrote these books.  Hence, Instead of Man Thinking, we have the book-worm." - Ralph Waldo Emerson

In perhaps the most provocative line in his "American Scholar" speech, given in Cambridge, Massachusetts on August 31, 1837, Ralph Waldo Emerson makes a distinction between two conceptions of education.  On one side, that of the "book-worm", students are to go about the work of studying greatness.  ON the other side, and the one engaged by the WikiSeat project, is a conception of education that promotes thinking and the actual potential for greatness of the students.

The Wikiseat project begins with what Nic Weidinger has called a Catalyst.  A Catalyst is a welded support structure that forms the beginning of what will eventually be made into a functional Wikiseat.  It's been one year since I first placed a set of Catalysts in front of the eighty-five students in our 10th Grade American Literature classes, and as I approach a second go at this project with a new batch of students, I find myself drawn to this distinction made by Emerson in 1837.

At the core of this project, is a lesson in the design thinking process.  Students learn to identify a problem or need (Where could I use a chair?), and then move into considerations of form (What should my chair look like?), and function (What should my chair do?).  They then sketch, prototype, build, test, and finally, produce their Wikiseat.  Students are encouraged to freely collaborate regarding materials, access to tools, and ideas concerning each other's work and progress.  Whether this be for a first grade classroom or a high school one, teaching students the iterative process is fundamental in helping students learn how to be thinkers and makers.

As a Language Arts teacher, I found ways to both work in some great literature, as well as use that literature to inspire and spur on students as they began actually constructing their Wikiseats.  We sat with our catalysts in front of us and read Whitman, Thoreau, and mainly, Emerson.  I was able to gauge student reading comprehension, and they had a purpose for reading in that the actual content served the overall purpose of their work on the Wikiseats.    It isn't difficult to imagine tie-ins to other curricular areas.  A math teacher could use the triangle inherent in a three-legged Wikiseat as an opportunity to talk about angles and measurement.  A biology teacher could link the design thinking process to the scientific one.  And a history teacher could find a way to take form and function into thinking about government systems and historical innovation.  And maybe a few groups of teachers could try all of the above with an elementary school classroom.

And as students begin to share their work with other classrooms, the Wikiseats will begin to tell a new story about what our students are capable of, of what we should actually be measuring, and what could change when given the right catalyst.
Posted by teachinghumans at 7:05 PM

Email ThisBlogThis!Share to TwitterShare to FacebookShare to Pinterest
Labels: wikiseat